One of my heroes is legendary magician Max Malini. This morning I made a pilgrimage to his house in Honolulu, met the current resident, and was invited onto the property to take photos and stand in the Malini garden. It was, quite simply, a sublime experience.

Together with local magician Curtis Kam, I retraced the steps to many of Malini’s old haunting grounds. 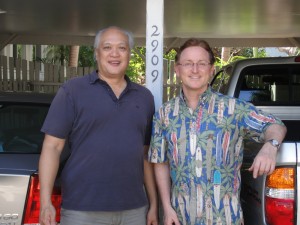 Here’s a photo of magicians Michael Skinner, Allen Okawa, Dai Vernon, Pressley Guitar, Roger Klause and John Cornelius in front of the same house in 1982. This photo appears in the book Roger Klause in Concert, and was taken during a magic convention held in Honolulu. 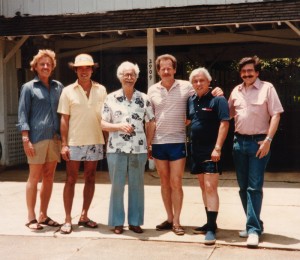 According to Curtis, nobody has ever been invited past the front gate. I figured that since I’d come all this way, it wouldn’t hurt to go just a bit further and make an unannounced call. “Act first, apologize later.” That’s how Malini would’ve done it!

We walked past the entrance gate and approached the front door. Through the screen window, the current resident (a fireman who teaches surfing!) saw us coming, and came out to greet us. I explained that we were magicians, and asked if he knew that he lived in the house of a world-famous magician in the 1930s and 40s. He had no idea.

The fireman genially accepted my request to snap a few photos of the exterior of his house, and invited Curtis and me onto the property. (Click any photo to enlarge)

Here is a view of Malini’s house: 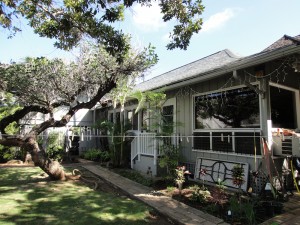 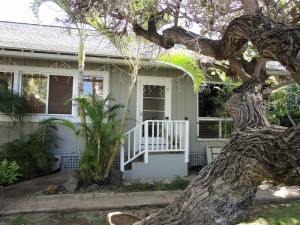 And Malini’s garden, with the original stone wall. 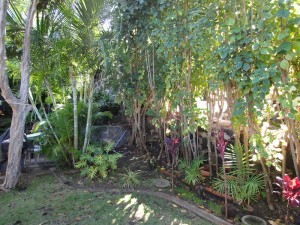 The house is a modest single level residence located on a small hill close to Diamond Head crater. Across the street is a home that was, in the 1930s, owned by a member of the Chinese mafia. That neighboring home has a large basement that was previously used as an illicit gambling hall. This is a particularly interesting fact since houses in Hawaii typically don’t have basements (owing to the reality that they are on an island, close to the water).

The friendly fireman told me that he’s actually been inside the hidden basement. One can only imagine that Malini was also invited. Maybe even at the peak of its activity as a gambling hall.

Curtis and I retraced Malini’s steps to the local Elks Club lodge (Lodge 616) where he was a member, initiated on May 18, 1934. There is a lovely article on their website about a performance that Malini gave for the Elks Club. Of note is that Malini performed for 4000 attendees, as the opening act for Will Rogers.

Here is the entrance plaza of the lodge. 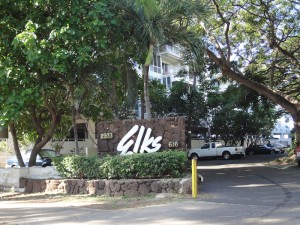 We continued on to two hotels that Malini is known to have performed at in his later years: the Moana Surfrider Hotel and the Royal Hawaiian (the “Pink Hotel”). 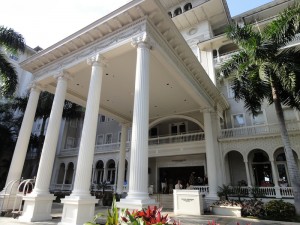 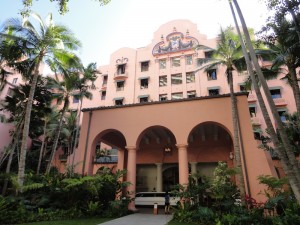 Royal Hawaiian hotel, where Malini performed in the Monarch Room

Here’s a photo of the Monarch Room inside the Royal Hawaiian. This is the actual stage that Malini stood on to give performances. 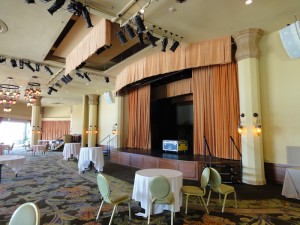 The entrance to the Monarch Room: 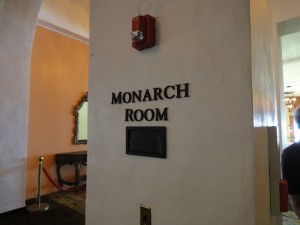 Although Malini died in 1942, I’ve idolized him for most of my career, even emulating his business model (he used to perform at the old Waldorf-Astoria in New York City). Retracing his steps was very meaningful for me, and I’ll always remember this experience. A big MAHALO to Curtis Kam for helping arrange this very special trip!

The only equally memorable experience I’ve had was visiting Johann Hofzinser’s grave in Vienna, Austria. Magic Christian first led me to Hofzinser’s gravestone in the Zentralfriedhof cemetery, and then drove me around Vienna to all of the buildings where Hofzinser actually performed his salon magic shows.

Here is a photo from that trip, about ten years ago 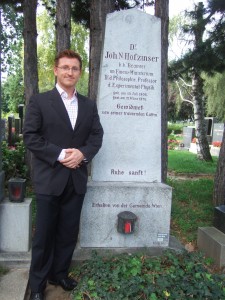 Any success I’ve found in magic can be traced directly back to these two giants in magic: Max Malini and Johann Hofzinser. How fortunate I’ve been to be able to visit and pay my respects to them both.