Welcome to MAGIC MENTOR MONDAY. In this weekly series, I introduce you to my magic mentors – people who have inspired me to become a better magician. Each Monday you’ll meet someone who has offered advice, or acted by example, to help steer my career.

Some of these people are alive, others no longer with us. Some are famous, others not so much. The beauty of mentorship is that you don’t necessarily have to meet your mentor face-to-face, nor even live during the same time in history. Many of the people who motivated me were alive a century before I was born! By reading classic books, old newspapers, and magazine articles, I’ve tracked down stories about their lives and work that continue to inspire me to become a better entertainer.

My “big three” mentors are Max Malini, Johann Nepomuk Hofzinser, and Jean Eugene Robert-Houdin. Each of these giants is being featured in this series. You’ll also read about more contemporary figures like Harry Lorayne and Albert Goshman, non-magicians Danny Kaye and Sammy Davis, Jr. and even fictional characters like Willy Wonka.

How do mentors inspire? They set examples, helping us imagine how we too might solve a particular problem. By seeing the world through a mentor’s lens, we can learn more about them, and about ourselves, at the same time.

This week, let’s turn our attention to a forgotten master: 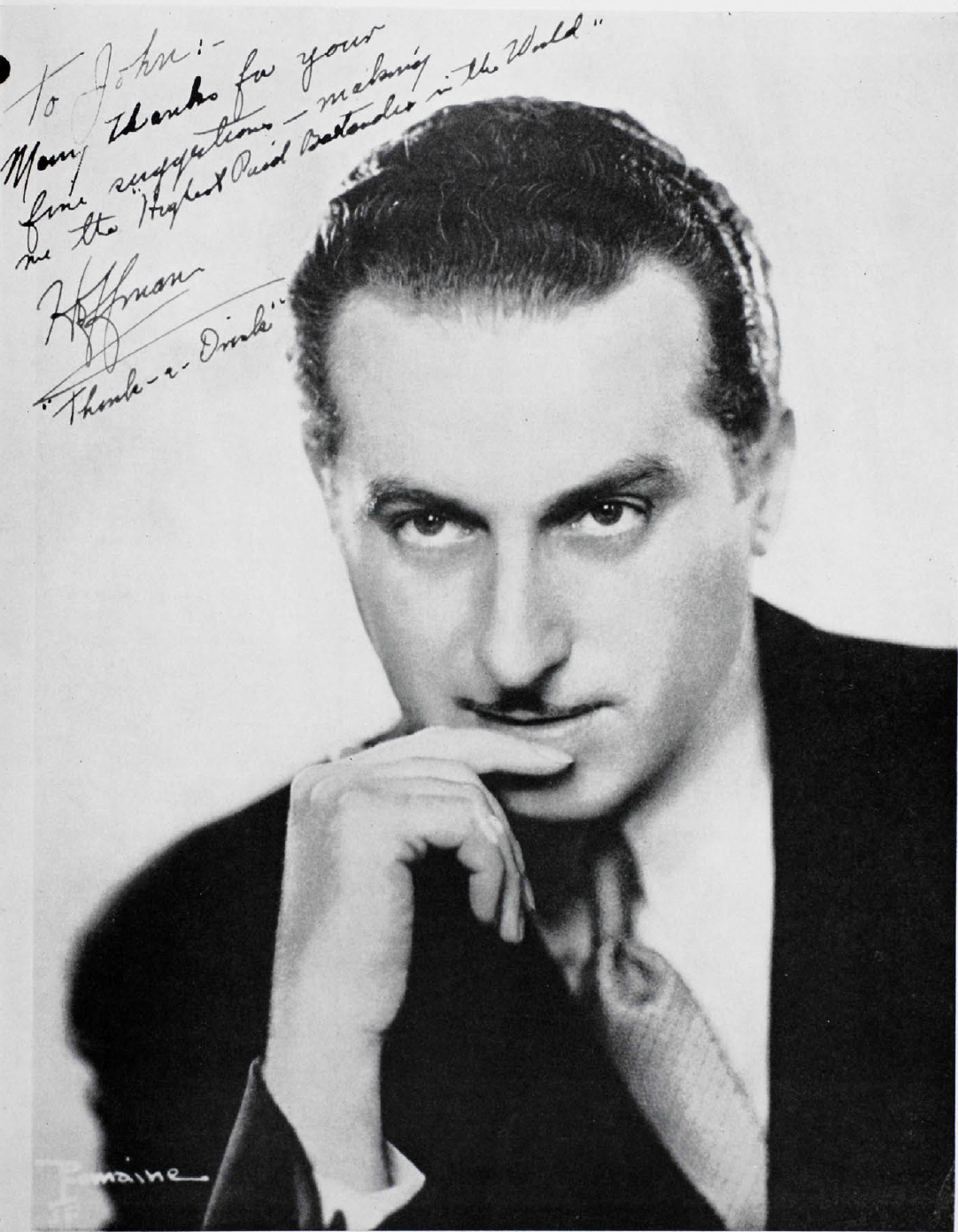 At the peak of his career, Charles Hoffman was the highest paid magician in the United States. This is a remarkable accomplishment considering he had almost died just a few years earlier.

After serving in World War I, Hoffman returned to America and, like many vets during that era, he was diagnosed with tuberculosis. He was sent to the Sunmount Veterans Administration hospital in Tupper Lake, NY to recover, but was so ill that “his doctors [had] instructed that his coffin be ordered.” (The Sphinx, Vol 40, No 2) During his stay at the hospital, Hoffman gave his first serious consideration to magic. He made up his mind that he didn’t want to die, and used magic as a shining beacon to lift himself back to good health. He created a rigorous personal recovery plan that required patience, attention to detail, and painstaking effort. Later he would apply the same principles to his magic act: upon his release, he created a highly polished and meticulous routine that set him apart from all other magicians.

It’s 1939. After a decade of depression, Americans are feeling upbeat about economic growth and prosperity. You’re seated in the swankiest supper club in town, and the Tommy Dorsey Orchestra plays their newest hit, “In The Middle of a Dream.” As the musicians hit their final notes, tonight’s MC introduces the headliner act: “Ladies and gentlemen, please welcome the highest paid bartender in town, the doctor of deception — Think-a-Drink Hoffman!” A handsomely tuxedoed gentleman walks to center stage, claps his hands loudly several times, and shows them undeniably empty. He brings both hands together, and magically produces a large fan of real bills from the U.S. mint. What an entrance! 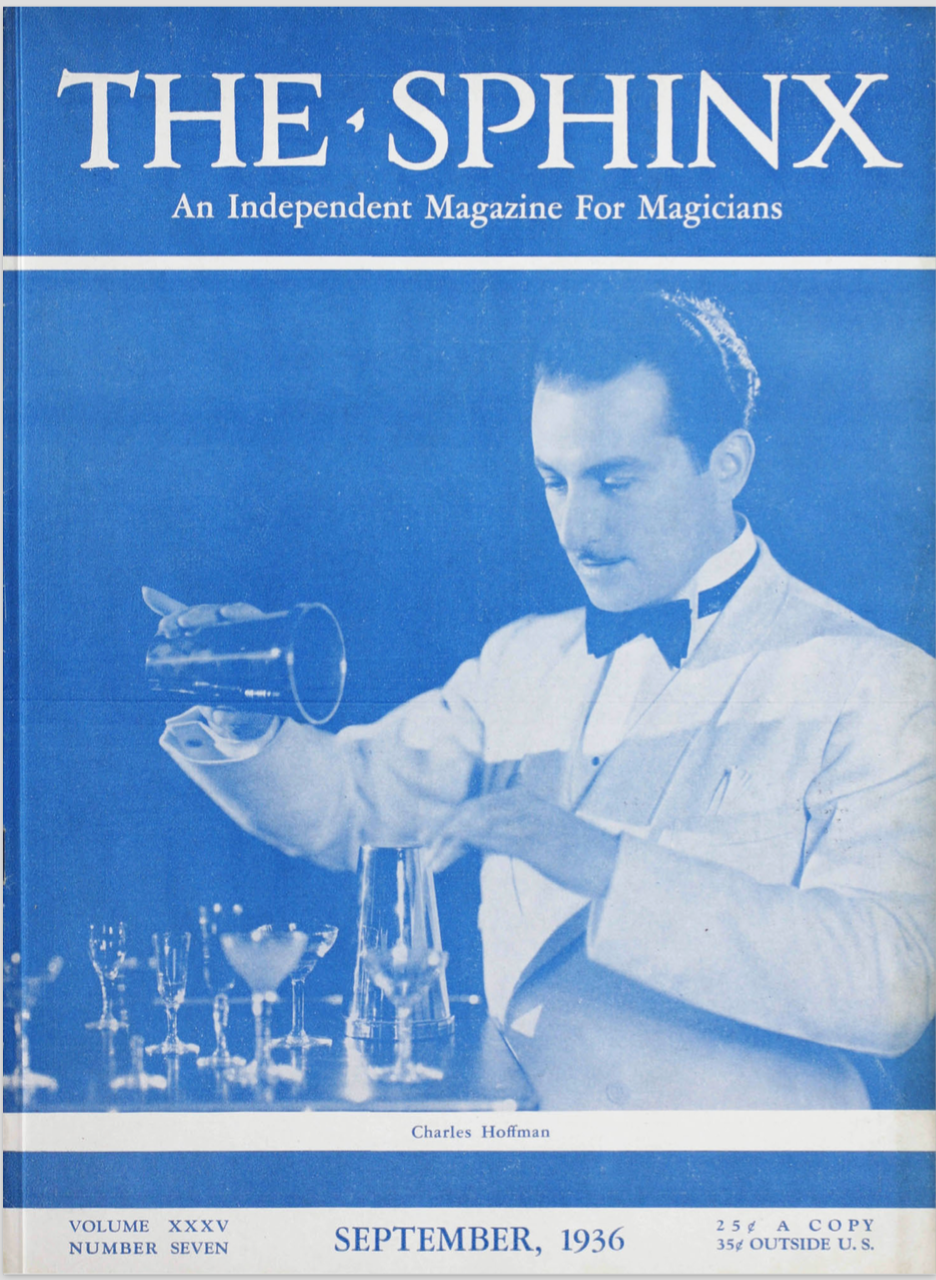 Hoffman walks to the standing microphone and introduces himself. He instructs everyone in the audience to think of their favorite drink. Any beverage at all. He points to a woman in the front row, and seems to “read” her thoughts. Hoffman lifts a cocktail shaker and martini glass from the table. He concentrates for a moment, and then fills the martini glass with a Pink Lady cocktail (gin, egg white, and grenadine). As he hands her the drink to taste, he asks, “Is that a genuine Pink Lady? More importantly, is that the exact drink you were thinking of?” She answers “Yes!” to both questions, bringing the first big applause of the night.

One after the next, Hoffman proceeds to pour more drinks from the same cocktail shaker: beer, whiskey, peach dacari, Coca-Cola! Each drink looks different from the previous one — some are clear, others colored; some are carbonated and others are not. Even more important, each drink tastes different from the last. Hoffman’s two female assistants walk into the audience with serving trays, distributing the beverages to each spectator who had requested a drink. They taste and confirm that these are, indeed, their favorite drinks.

Someone yells out, “How about a Zombie!” Hoffman picks up a large glass and asks, “Sir, do you know what goes into a Zombie?” He rattles off a long list of ingredients: “White rum, golden rum, dark rum, apricot brandy, lime juice, pineapple juice, papaya juice!” Despite the challenge, Hoffman immediately pours the complex drink, garnishing it with a paper cocktail umbrella. This unexpected flourish earns a huge laugh.

Someone asks for coffee. Hoffman immediately pours hot coffee from his magic shaker, then reaches into the air to produce sugar cubes and a creamer.

Finally, he walks to a young man in the front row and says, “Young fella, you look like you’re ready for dessert.” Hoffman then pours the final drink: a chocolate soda with ice cream. He produces a spoon from his bare hands, drops it in the drink, and takes a final bow. 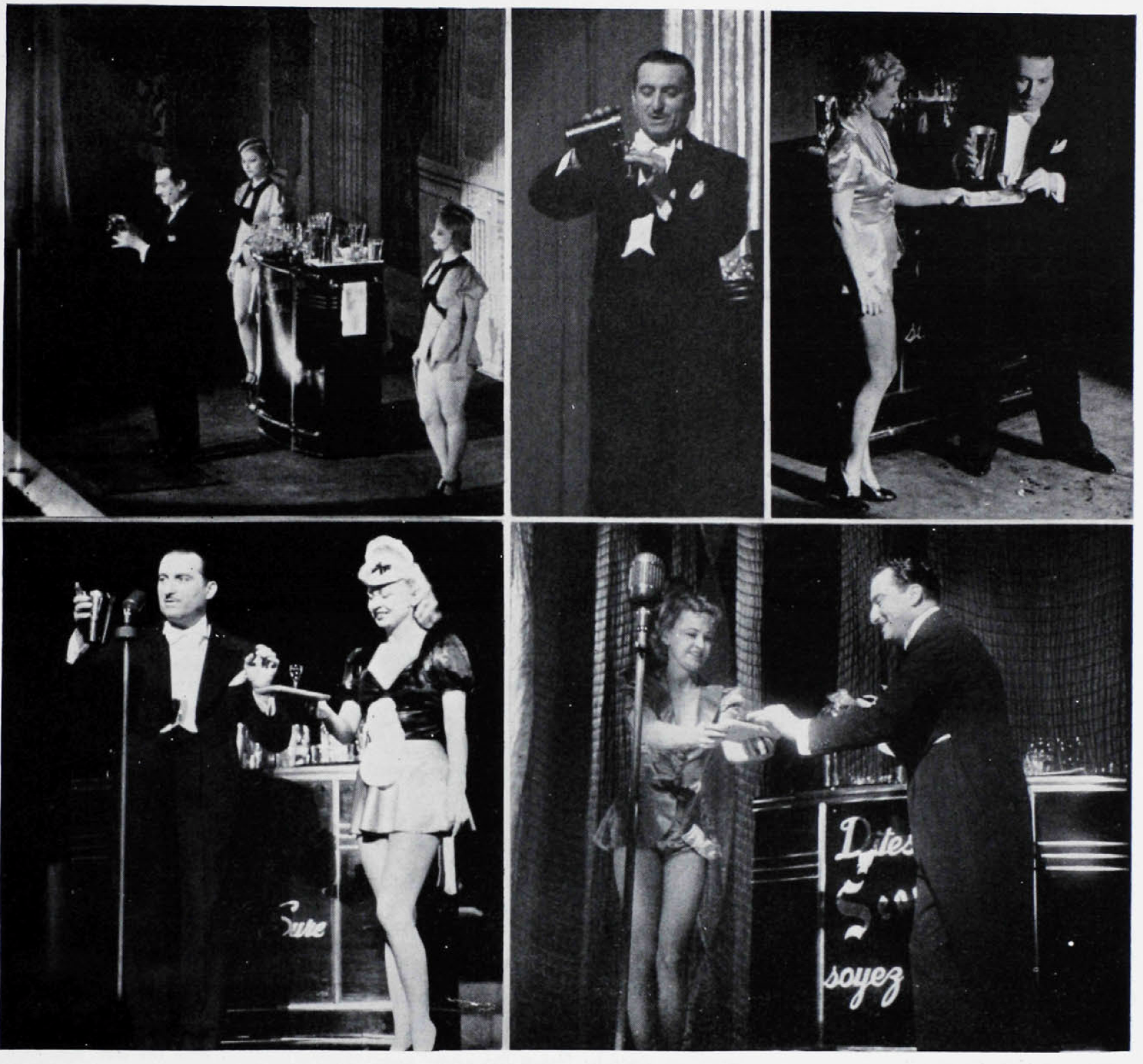 What lessons have I learned from “Think-a-Drink” Hoffman?

SPECIALIZE TO STAND OUT 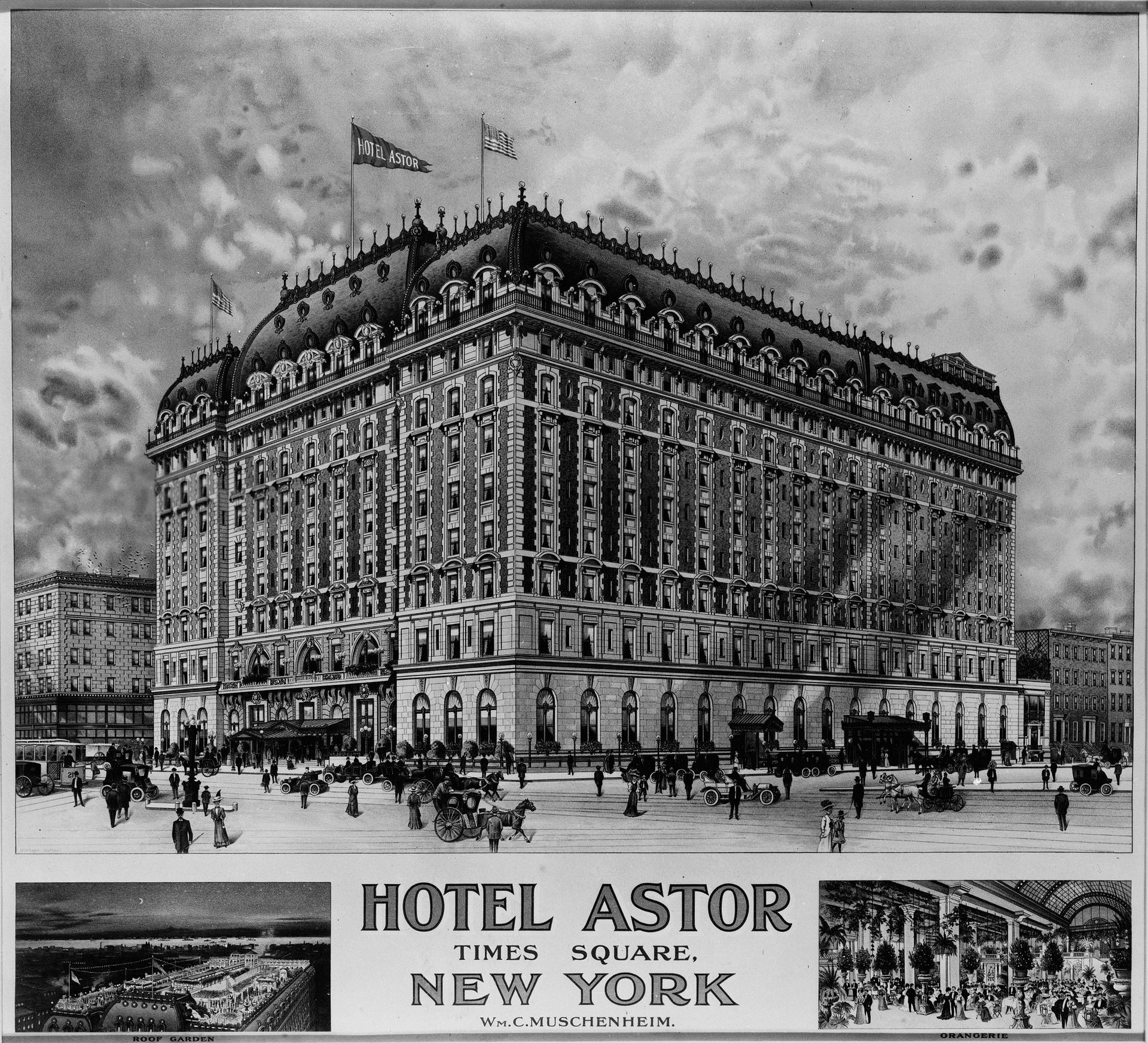 Early in his career, Charles Hoffman performed a relatively generic magic act. In his first public engagement at the Astor Hotel in New York, he presented standard tricks often seen in the acts of his peers: card fan productions, a rope trick, lit cigarette productions, and the well-worn Chinese Sticks. In the midst of these old standbys, he inserted an abbreviated “bar” act, pouring various fancy drinks from an apparently empty shaker.

Hoffman spent three years preparing the props and refining his presentation before rebranding himself as “Think-a-Drink” Hoffman. His new act focused on one theme only — to pour any drink that spectators could imagine. Although the act was only twelve minutes long, his career began to take off. He found steady work in the top venues in every major American city. 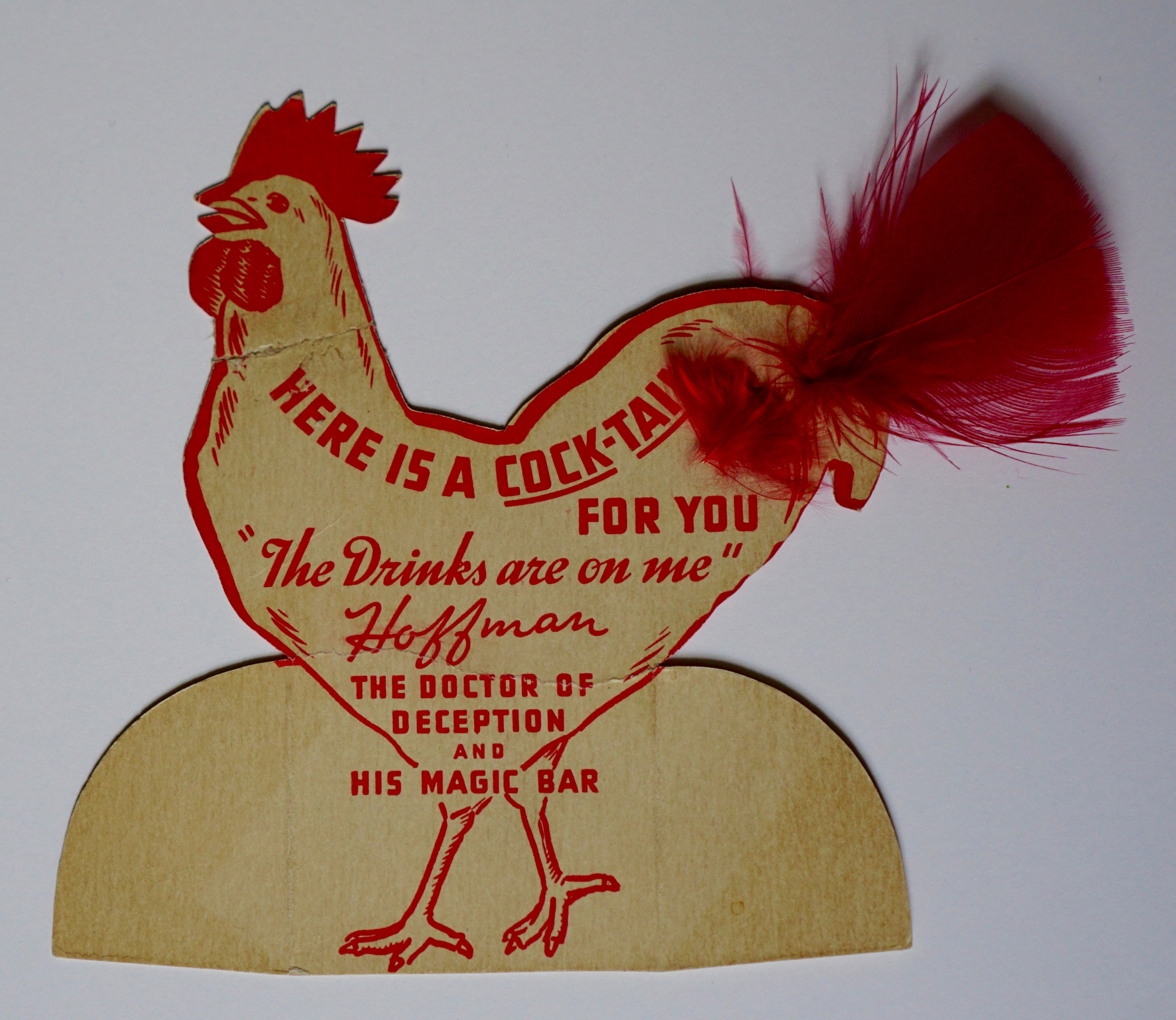 Before specializing in a narrow field, Hoffman was indistinguishable from other working professionals in his market. Talent bookers could price-shop for magicians, since they all presented roughly the same material. Once he narrowed his focus to one specialty, however, Hoffman created his own category. The novelty of his act stimulated demand, and the lack of competition meant that he could command higher fees.

TACKLE SOMETHING OTHERS WON’T

Charles Hoffman traveled with 225 pounds of equipment, packed into five crates. For a 12-minute act, he had a lot of stuff! Before each show he required a 30-minute orchestra rehearsal, and after the show he needed to clean all of the glasses so they’d sparkle for his next venue. All told, he needed to mold his life around his act. In addition to his splendid showmanship onstage, he required dogged determination offstage to schlep his props to each show. 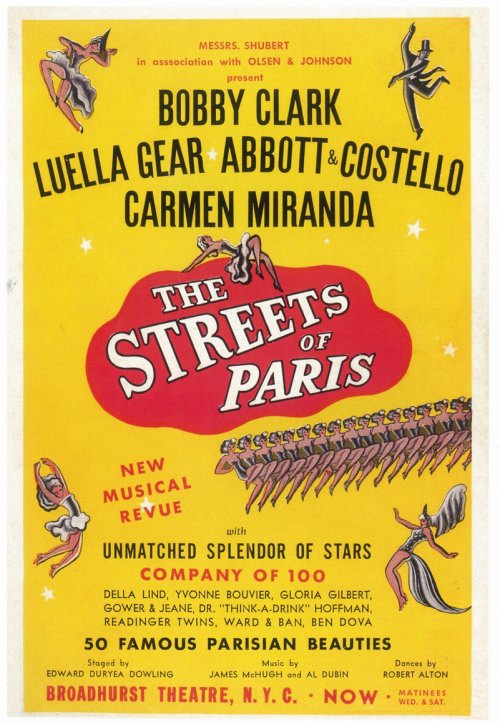 By tackling something that others would not, Hoffman stood out in the competitive field of legitimate show business. He was cast in the Broadway revue, “The Streets of Paris” at the Broadhurst Theater, starring Abbott & Costello, Carmen Miranda, and Gower Champion.

I was fortunate to meet lyricist Stephen Sondheim on several occasions, and he told me that he saw “Think-a-Drink” Hoffman perform his act in “The Streets of Paris.” Although he was only 9 years old at the time, Hoffman’s magic made such an impact on the young Sondheim that he still remembers it to this day.

As Hoffman’s fame and success grew, so came the imitators. In 1943, he battled someone nicknamed “Have-a-Drink” Count Maurice in court, and won an injunction against the copycat act. For more about this fascinating case of trade secrets as applied to show business, click HERE.

By dedicating his life to something unique and difficult that would deter most others, Hoffman ultimately reaped the benefits of his hard work. 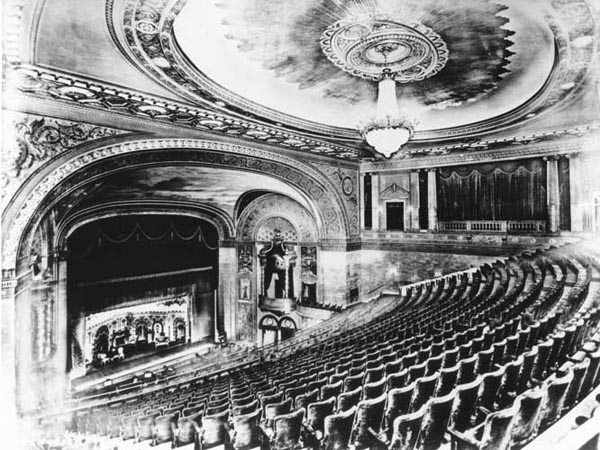 In 1941 “Think-a-Drink” Hoffman played the Loew’s State Theater, located at 1540 Broadway, a building that later became the home of Tannen’s Magic shop. Despite being in one of New York’s largest theaters (3,327 seats), Hoffman confidently held the huge audience in the palm of his hand. People seated in the rear seats were unable to see the small glasses that Hoffman held, but they didn’t care because of his superb showmanship. (Other famous magic acts who performed at the Loew’s State include Paul LePaul, Ade Duvall, Dunninger, and Cardini.)

When Houdini performed in New York’s Hippodrome theater (5,300 seats), people seated in the balcony were unable to see the sewing needles he pulled threaded from his mouth. The audience could readily understand what was happening on stage, however, due to Houdini’s confidence, energy and sheer personality. I believe that Charles Hoffman did the same.

Charles Hoffman became a star by specializing in a unique branch of magic that most others found cumbersome. He worked extremely hard, and discovered how to dovetail both his skill and his charming personality into a commercial act.

While the “Think-a-Drink” act is rarely performed by modern-day magicians, I have made it a feature item in my own weekly show, Chamber Magic, which plays every weekend at the Waldorf Astoria hotel in New York City. If you’d like to see “Think-a-Drink” in person, come visit soon, and be sure to have your favorite drink in mind! Thanks to Charles Hoffman, “Think-a-Drink” is magic that’s as close to real wizardry as you may ever see. 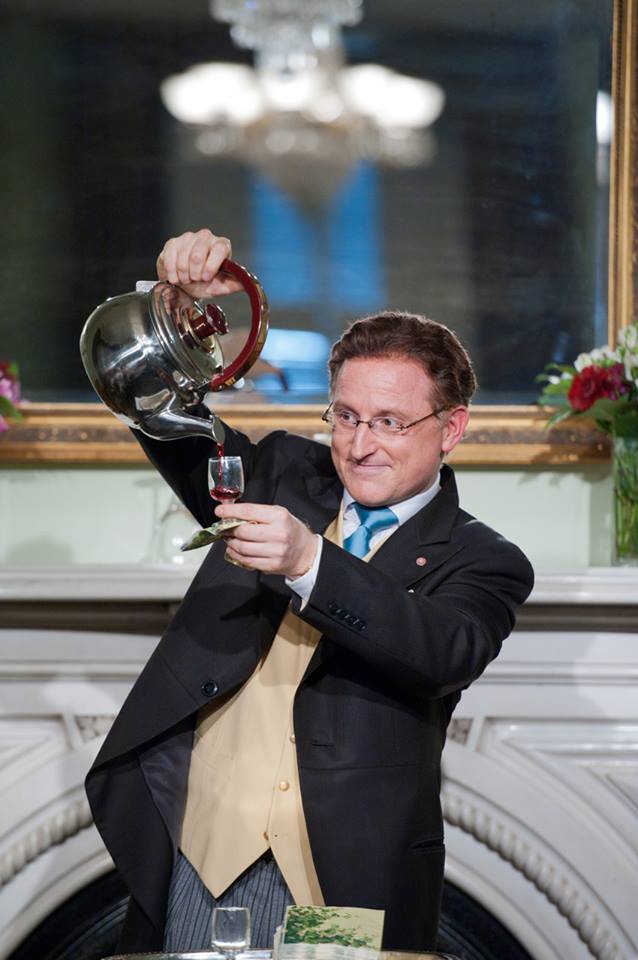