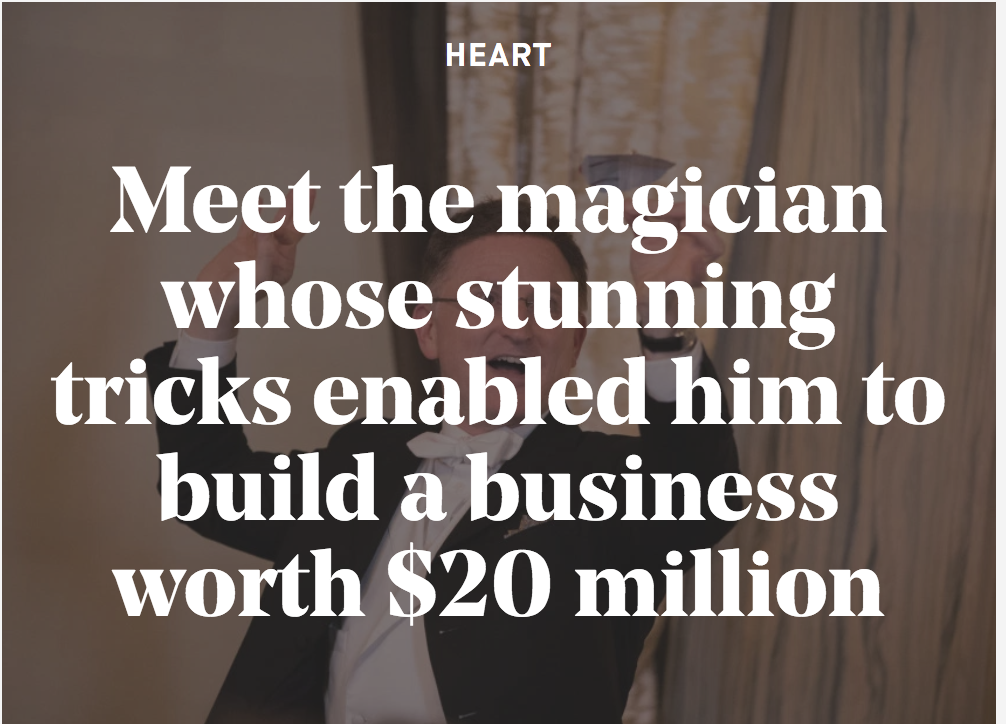 With a touch of magic, Steve Cohen went from almost nothing in the bank, to running a $20 million business.

Professional magician Steve Cohen — known in some circles as the “Millionaires’ Magician” — has performed magic for the likes of Warren Buffett, Michael Bloomberg, the Queen of Morocco, and Prince Sultan bin Saud of Saudi Arabia, among many others. Now, he holds court at the New York Palace Hotel, presenting an exclusive magic show called “Chamber Magic” to 64 guests a show on Fridays and Saturdays in the Madison Room, a sumptuous space that features hand-painted, nineteenth century art. If you choose to attend, you’ll have to dress the part — elegant cocktail attire for ladies; jackets and ties for gentlemen, please.

Cohen’s ascent to the top hasn’t come as easily as flicking a wand or reciting a few magical verses. As recently as the early 2000s, Cohen was a struggling magician whose clever tricks weren’t enough to keep him financially afloat.

“I had about $200,000 in savings at the time… which I depleted,” Cohen recalled in an interview with Moneyish. “I was ready to throw in the towel in 2003; I had been at it [magic] for about two years, and [my wife and I] were eating pasta, or if we had a donut, that was dinner.”

Today, things are different, but Cohen’s path has been marked by resilience that, along the way, has trained him to think like a businessman. Before the glamour of the New York Palace or his previous venue, the $10,000-a-night Royal Suite at the Waldorf-Astoria, he was “a young guy in my mid-20s, had moved back from Tokyo, was pretty poor, [and] couldn’t get people to hire me unless they could see how good I was.”

Cohen’s early shows, private performances at parties and such, netted him just $1,500 per performance, sometimes a little more, until he met the man who would later become his creative director. “If you take the $2,000 gig, you won’t get the $20,000 gig,” positioning consultant Mark Levy admonished the magician, and Cohen heeded his advice.

Eventually, the duo developed Cohen’s current personage: the “Millionaires’ Magician,” a concept that grew out their observation that the market for professional magicians lacked a performer whose tricks were aimed at the wealthy elite. One particular publicist in Cohen’s orbit warned him that following this path could be detrimental — what would happen after there were no more millionaires left to perform for? — but he forged ahead, and his gut intuition ultimately paid off.

After an appearance on CBS Sunday Morning circa 2006, Cohen’s career skyrocketed. “Within the next two days, we had sold $600,000 worth of tickets; by the end of the week, it was $1 million in ticket sales. A million dollar week.”

And that was the tipping point that turned Cohen into a juggernaut. As an homage of his recent, 5,000th show, New York Mayor Bill de Blasio proclaimed October 6th “Chamber Magic Day,” in Cohen’s honor.

His talents have also taken him around the world. A graduate of Cornell University in psychology, Cohen traveled to England, India, and all across the United States to film a History Channel documentary on the forgotten origins of magic.In India, he discovered “the secret of making a rope levitate up 20 feet into the air, rigid like a pole,” performing an ancient trick lost to all but one Indian master — a street magician in New Delhi. In its original version, the magician’s son “climbs up the rope and disappears. The son would disappear into the sky, the father would climb the rope with a scimitar, and down would come limbs and a bloody head,” said Cohen. “Then the father would climb down, take all those limbs, put them into a basket, and the boy would be revived unharmed.”

So what’s next for the man whose tricks — like these and others — defy all logic or explanation? Cohen plans to continue his signature “Chamber Magic” showcase, and his most noteworthy tricks, like “Think-a-Drink,” which involves a “magic silver tea kettle that can pour drinks on command, as requested by the audience.”

Reflecting on his mystical, magical journey, Cohen concluded: “I had no clue that it would ever turn into this. I love magic, I love performing. I love entertaining people, because it gives me joy to see them happy.”And, speaking about the dumbfounded reactions that his audiences offer every time he performs, he added: “For those who believe, no explanation is necessary. For those who do not, none will suffice.”